We don’t believe that we have talked about Swintt or any of their games in the past. Founded in Malta in 2019, they are a part of the Glitnor Group, which owns various gambling sites. Their management team boasts a staff consisting of former top heads at companies such as Microgaming and Wazdan. Under their leadership, this company has amassed a diversified gaming catalog of over one hundred slots in its three-year existence.

Make no mistake about it. If you have not heard of Swintt until today, that does not mean that they are a negligible player in the interactive gaming sphere. On the contrary, they have a hefty yearly budget at their disposal, and they are proving that with The Crown, unleashed on online casinos everywhere on April 27. We saw that the star of this game, Vinnie Jones, made an appearance at the London 2022 ICE Expo to promote this title, so we thought we should give it a look-see.

Every cinephile likely knows of Vinnie Jones, the British actor that has spent the past two and a half decades getting typecasted as a violent criminal. He played memorable parts in Guy Richie’s first two flicks before moving onto Hollywood, where he shared the silver screen with Nick Cage and Angelina Jolie. However, what many moviegoers do not know about Jones is that he was a successful football player before morphing into a thespian. He wore the jersey of clubs such as Leeds United, Sheffield United, Chelsea, and Wimbledon.

The Crown attempts to capitalize on Jones’ recognizability and his association with gangster flicks. It makes no bones about this, featuring a heist storyline revolving around Jones leading a crew of criminals in what we assume is London for a pub crawl. The graphics here are digital paintings with nice vibrant colors, creating a late-2000s orange and teal vibe, which was the go-to combo for most higher-budget movies from that era. The music here is nothing to write home about, and in our opinion, some of the sound effects are too fruit machine-like for our taste. They do not fit the overall crime atmosphere that this title is trying to capture. We do appreciate that this game has multiple settings, which helps keep things fresh as your session goes on.

Naturally, the buttons’ panel of this slot is at the bottom of your screen. Swintt does not do anything revolutionary with its user interface, as it keeps the spin options on its right side while the bet-adjuster and info icon are on its left. Design-wise, they are also pretty standard. 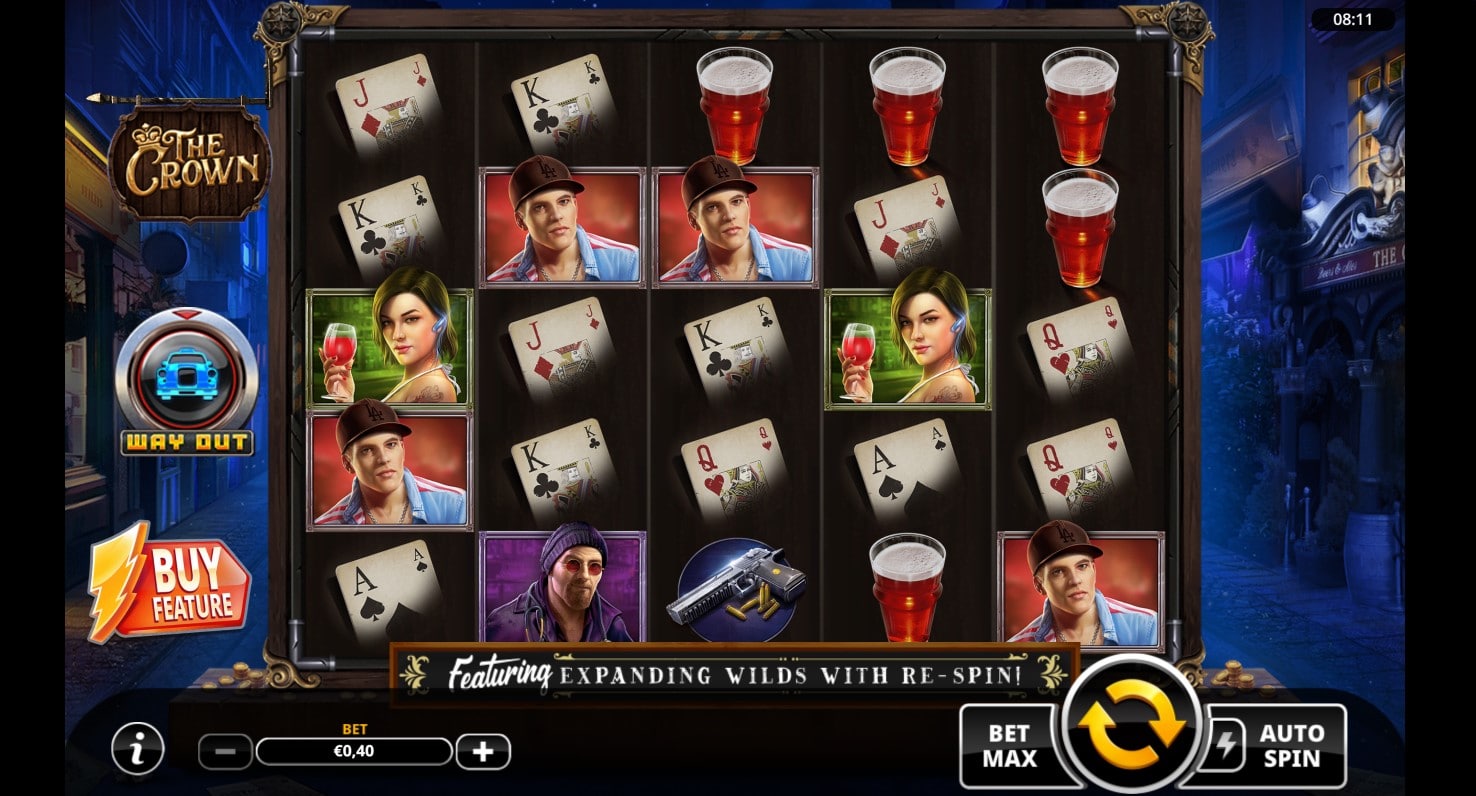 The slot’s low-paying tokens are A, Q, J, and K royals, depicted as actual playing cards in different suits. Q and J heart and diamond royals pay prizes of x1 for five-of-a-kind. The A and K cards, spades, and clubs pay x1.2 for five-of-a-kind. The high-paying symbols of this game are a gun and beer glass, plus the four members of Jones’ crew. They yield wins of x2 to x8 if they show up five times on the reel grid on the same spin.

The royal crown is this slot’s Scatter, while Vinnie is the Wild, substituting all other symbols except for the Scatter, plus paying put rewards of x8 if he appears five times in view on the same spin.

Before you spin the Crown’s reels, you can pick a setting. The game lets you switch between four pubs by clicking the car button left of the reel-grid, above the Bonus Buy option. You can say that the car icon drives you from location to location in this slot, each one boasting its random base game feature.

The Crown Pub offers an expanding Wild mechanic. When Vinnie Wilds appear, they grow in size and activate a re-spin. In the Bullseye Bar, Vinnie can show up with a multiplier attached. One from x1 to x4, affecting every winning combo it helps create. The Drunken Duck has random Wilds, showing up as singular tokens or as blocks up to a size of 5×5. Micheal’s Whiskey Tavern utilizes Sticky Wilds, which can remain on the reel grid for as many as five spins.

If you land three or more Scatters on the same spin, you will gain entry into the Crown Caper Free Spins. The mode begins with a card selection round where you need to choose ones that reveal Jones’ crew members. Depending on your luck, you can win from eight complimentary reel rotations and an x3 win multiplier up to twelve free spins with an x7 multiplier. You advance one level for one extra starting spin and an x1 multiplier boost if you attempt to go through a level but reveal a whaling siren that ends the round, and the Crown Caper Free Spins begin. It starts with Vinnie as a Sticky Wild that gets locked in the center of the grid. It stays there for the duration of this mode. You cannot retrigger this mode, but you can buy your way inside it if you are willing to spend x75.

For sure, Vinnie Jones’ debut on digital reels will turn some heads and draw attention to this game, which is pretty entertaining in its own right. We always look at a wealth of bonus features as something positive, and we quite like the diversity The Crown had to offer. Its betting range could have been better, as it does not go low or high enough for our fancy. Nevertheless, the hit frequency of 30 is something we liked, despite its low RTP of 94.27%, particularly for a medium variance game. Overall, this spinner will not be everyone’s cup of tea, but we are sure that many casual online gamblers will find it unique enough the first few times they play it.