The Scientific Games Corporation has long been a brick-and-mortar mainstay casino equipment provider. In March 2022, it announced a name change into Light & Wonder Incorporated, which served as a proclamation that this brand is opening a new chapter in its history. It has now set its sights on becoming a leading cross-platform global game company that will dominate the real money and free-to-play social online gaming markets. That is not something that has happened out of the blue, as in the past couple of years, SG has begun focusing more on releasing online spinners than ever. Stargate Megaways is the most recent addition to their internet slot portfolio. It debuted at the tail end of the second week of April and has yet to make a splash. Still, since this is a branded game with a built-in fan base, we thought we’d give it a look.

Stargate is a science fiction media franchise that began with a 1994 movie written and directed by Roland Emmerich. Its premise is that ancient ring-shaped devices exist throughout the universe, acting as wormholes, gateways to other worlds. The movie’s plot explores the theory that extraterrestrials had a hand in impacting the development of human civilization. However, the TV show based on this film is now the top association when the word Stargate gets thrown around. Also known as SG-1, this series debuted on Showtime in 1997 and aired its final episode on Sky1 in 2007, capping a catalog of 214 episodes and two straight-to-DVD films. It has a cult following and stands as the only US TV series to have a 100% endorsement of the United States Armed Forces.

The visuals here utilize still images from the 1994 movie, which is the theme here. So, expect to see James Spader and Kurt Russell as game symbols in this spinner. The backdrops of Stargate Megaways are painterly illustrations of recognizable parts of the TV show, more so than the movie that predates it. To us, this slot had a Who Wants to be a Millionaire look and felt like something that would have gotten released a decade ago and not in 2022. The soundtrack is also rather bland, sounding like an extract from a late-1990s PC video game. Though, we must point out that Stargate Megaways does utilize the movie/show’s main score, which is nice. Still, we found the presentation here underwhelming. It looked outdated to us.

You can find the spin button, the auto-spin function, and the bet-adjuster right of the reel grid. The game’s layout sits inside a Stargate in the base game.

As its name clearly tells you, Stargate Megaways utilizes the innovative random reel modifier system under license from Big Time Gaming. Hence, the number of symbols per reel (six total) here can expand up to seven, utilizing up to 117,649 ways to win. Stargate Megaways is a high variance spinner with a default RTP of 94.1%, boasting a betting range that goes as low as $0.2 and as high as $10. The max exposure setting of this title is x25,000, or in other words, it has a max cap of $250,000.

The low-paying tokens of this slot are A-9 royals, paying out rewards of x0.5 to x0.8 for six-of-a-kind. The high-paying are the three main characters from the 1994 movie, and a pyramid and sarcophagus. These will pay out wins of x1.5 to x10 for six identical symbols in a batch. A winning combo occurs when matching symbols appear on adjacent reels starting from the leftmost one.

A golden medallion with the Eye of Ra symbol on it is the Wild here, and the Eye of Ra is a scatter of sorts, only showing up in the Free Spins round.

Stargate Megaways also uses the cascading mechanic, so symbols that comprise a winning combo explode, allowing new ones to fall into their place, creating new opportunities for prizes.

Scientific Games have implemented a Stargate trail in this slot, with nine sections. Each cascade increments the trail by +1. When you reach the fifth trail position, a random modifier gets activated. Once you hit its seventh position, the bonus round starts. Note that the trail advancement resets after every spin. That means you have to land consecutive cascades to advance through its sections.

The random modifiers are up to six Wilds appearing on the grid, reels expanding or turning Wild, up to ten symbols on the grid getting transformed into the same one, and the game replacing existing tokens with new ones. Reaching trail positions seven, eight, and nine activates Stargate Megaways’ bonus mode, providing five, six, and seven free spins. The feature begins with a pick ’em mini-game, where you get presented with fifteen closed doors, and you get to pick seven. Depending on what modifiers you get in this feature, they get carried over to the free spins round, which cannot retrigger, but whose number of complimentary reel rotations can get reset via the Eye of Ra symbol. The modifiers in the Free Spins mode are additional complimentary reel rotations (up to 25), win multipliers, more ways to win, more Wilds, expanding Wilds, cash prizes, and resetting the Free Spins counter.

You can buy a trail position if you are impatient and cannot way to reach one through your natural gameplay. The cost of this privilege is x31.5, x45.5, x72.5, and x123.5, depending on which segment you wish to purchase, from five to nine.

There is a lot to like about Stargate Megaways. We believe that the presentation here could have been better, but the Megaways engine, coupled with the cascade mechanic, offers up some sweet base game spins, and the bonus features of this slot are also fairly dynamic. The max prize is disappointing for a high variance title, yet, all in all, this is not that bad of a game. It has some flaws, though fans of the movie and TV show will for sure overlook these as they try to land some mouth-watering wins of this sci-fi reel-spinning extravaganza. 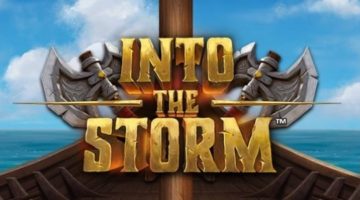 Into the Storm Slot Review